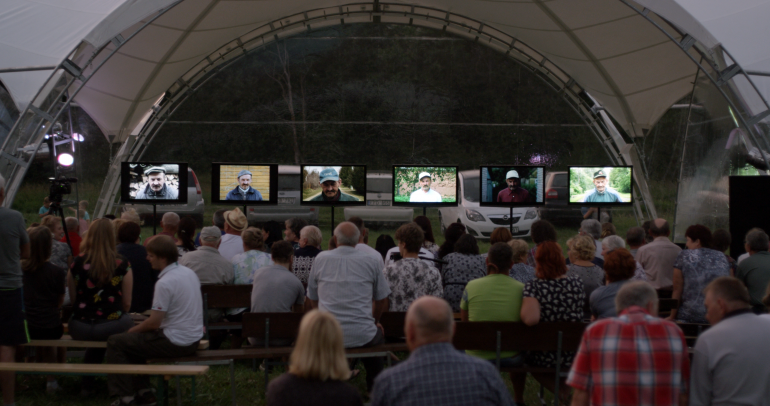 Gustoniai is a village located in the northern part of Lithuania. This place also lends its name to a contemporary art project that commenced in 2001. Every three years, artist Darius Ziura shoots a one-minute video portrait of every villager that has agreed to participate in the project. These portraits are then pieced together and edited into a film. With every episode, the project expands it’s time spectrum, thus reflecting on changes both in people’s age and lifestyle, as well as the evolution of social structures and processes, which are affected by the changing socio-political situation in the country. This project also reflects on the rapid changes in filming techniques and editing strategies, presenting the different trends of visual culture of every period.
In the summer of 2018, Darius Ziura organizes an arts festival in Gustoniai, where the participants of the project can see the films by themselves for the first time. The footage captured during this festival is intertwined with excerpts from the previous films, as well as the personal archives of Darius Ziura, shedding some light on his creative process, the course of developing relationships with the participants of the project, the emotions and the ups and downs of the process. All these layers are tied into a narrative impossible to categorize into neither of the traditional documentary genres. It presents cinéma vérité depicting cinéma vérité and offers different points of view on a microcosm that reveals something infinitely larger and indescribable.

Photography, writing, filmmaking. Studied in Vilnius Academy of Arts, in 2017 received a PhD. Darius Žiūra began his career with creating objects, which can be characterized by a subtle combination of minimalist form and narrative, emptiness and materiality, mysterious melancholic mood and irony. Later he concentrated on photography and video art. Compilations of short-length video portraits are his main focus. They are often contemplative and provocative, analysing various human existence forms in a visual context. Organised numerous solo exhibitions, notably at CAC Vilnius in 1998, 2005 and 2015. Participated in numerous group exhibitions, including Manifesta 5 in San Sebastian, Spain, in 2004 and in Manifesta 7 in Bolzano, Italy, in 2007.