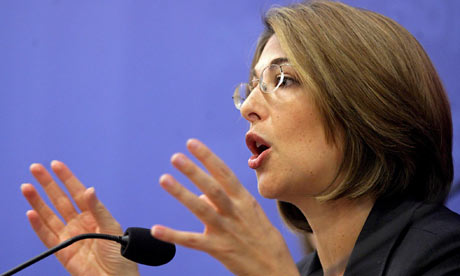 The Shock Doctrine is a feature documentary based on Naomi Klein's bestselling book of the same name. The film is a gripping and incisive breaking down of how free market policies have come to dominate the world through the exploitation of disaster-shocked countries and people. It radically challenges the myth that the global free market triumphed on the wings of democracy. The film argues, as the book did, that both big business and governments overexploit natural disasters, economic crises and wars with the very aim of pushing through radical free market policies. Naomi Klein calls this “disaster capitalism.” The film traces the doctrine’s beginnings in the radical theories of Milton Friedman at the University of Chicago, and its subsequent implementation over the past 40 years in countries as different as August Pinochet’s Chile, Boris Yeltsin’s Russia, Margaret Thatcher’s United Kingdom, and most recently through the invasions of Afghanistan and Iraq.

He was born in 1961 in Blackburn, Lancashire, England, and earned a degree in English at Oxford University. Later he went on to study film at Bristol and London. Soon after studies he directed two well-received documentaries, Ingmar Bergman: The Magic Lantern (1988) which won the Best Documentary Prize at the Valladolid Film festival, and Ingmar Bergman: The Director (1988), both of which dealt with the revered Swedish filmmaker. His first feature was Butterfly Kiss selected for competition at the Berlin Film Festival in 1995 while his BAFTA winning In This World (2003) was awarded the Golden Bear. Winterbottom has had a wide array of diverse film projects that have ranged from neo-noir thrillers and political documentary dramas to gritty family melodramas and satirical comedies. His films have been show at various international film festivals, from Berlin and Cannes to Sundance and San Sebastian, where they have received numerous awards.

He was born in 1977 in Oxford. He has directed music videos for Coldplay, Jay-Z and The Magic Numbers. The Shock Doctrine is not his first collaboration with Michael Winterbottom – he worked as an editor on 9 Songs which was awarded for cinematography at the Sundance International Film Festival whereas The Road to Guantanamo co-directed together Winterbottom won the Silver Bear at Berlin in 2006.

She was born in 1970 in Montreal, Canada. She is a journalist, political analyst, writer, filmmaker and influential figure on the American left. She first earned fame for her book No Logo (2000) which some call “a movement bible”, while others refer to as a manifesto of the anti-corporate globalization movement. Apart from many other things, the book analyses famous brands revealing how they attack our everyday life, conquer imagination and the sub-consciousness, monopolize markets and overwhelm public space. Published in 2007, her third book The Shock Doctrine: The Rise of Disaster Capitalism became a bestseller and was translated in 27 languages. In 2009 it brought Klein the Warwick Prize for Writing (UK).